Remember What They Took From You#

- implemented filters to protect one dimensional text children from abuse. But because they have never heard of RegEx, it's ineffective at best and completely breaks normal stories at worst: Update to Our Community - April 27 / web archive / archive.md
- Know the filter (may be outdated)

- proudly announced that they'll add more to their filters in the future.

- refused to listen to community concerns. "This is what it means to take a stand 🤷‍♂️": A selection of interesting quotes from our dearest Alan

- have known about a vulnerability that leaked user content alongside their user names for at least a month, but chose not to inform their users: AID Adventure Vulnerability Report released on the 26th of April

Notice: Following responsible disclosure procedures, the issues here have been brought up to the developers and have been fixed before this report was published. Similarly, all private data collected has been deleted.
[…]
On April 18th, I discovered a vulnerability in the AI Dungeon GraphQL API that allowed unpublished adventures, unpublished scenarios, and unpublished posts to be leaked. These resources could be read in bulk, at a rate of approximately 1000 requests per minute. Unfortunately, this is, in fact, the second time I have discovered this exact vulnerability. The first time, the issue was reported and fixed, but after finding it again, I can see that simply reporting the issue was a mistake.

- realized this won't just blow over in a couple days and entered radio silence.

- deleted a community suggestion on their feedback forums which asked them to only moderate public stories.

- removed their social media links from the play.aidungeon.io site: r/AIDungeon: Why fix when you can remove - The links for Discord / Reddit / Blog / Twitter have been EXPUNGED

- disowned their official Discord server, changing the welcome message from official to unofficial literally as people were discussing its legitimacy. Some moderator was lurking in the discussion, some guy posted a link to the server's welcome message as proof that the server is official and not 5 minutes later it was edited to say unofficial.

- cancelled all live streams until the 7th of July.

- continued pushing mini updates that either do basically nothing or break things. May 17, first actual game update since the incident. World Info overhauled; now buggy and unstable. Pointless UI updates followed, most likely to look busy.

There was a bug that made WI entries invisible. Anon with alt accounts on different display themes discovered that entries only show up if you set your theme to BLACK, DARK, or LIGHT.

- finetuned their AI models with content violating their own policies: Presentation of select portions of the data set used to fine-tune both the GPT-2 and GPT-3 models of Oasis Tech, Inc.'s (doing business as Latitude) text adventure game, AI Dungeon. This document cites official Latitude content not suitable for minors.

anon's post about being paid to review flagged stories through Taskup.ai
r/AIDungeon: Latitude is paying random strangers on a crowdsourcing platform money to read your stories and police them for no-no words.
Video proof of him navigating the website

I remember reading this story from a user made Scenario published on AID's Explore, when it was still up.

"The information that the content being sent for crowdsourced moderation is FAR FAR broader than what's caught by Latitude's CP filter, it seems to be basically all smut, and anything that looks like it could possibly be smut." "also non-smut" anons added.

They still haven't said anything about the questionable training data they used.

The thread called him larpanon because at first they thought he was LARPing.

A different anon claimed he can access a Taskup database where the stories for review are stored.

Taskup went down for about a day until 05/30/21 00:01:56, when another anon noticed it was back up. Time in the screenshot is in UTC+2. We don't actually know if the outage had anything to do with DBanon accessing their data.

^ is organized and has gallery view.

Content in the database DBanon accessed matched with users' stories.#

View these image links in order.

r/AIDungeon: […] the evidence of negligence to their customer-base is just insurmountable. 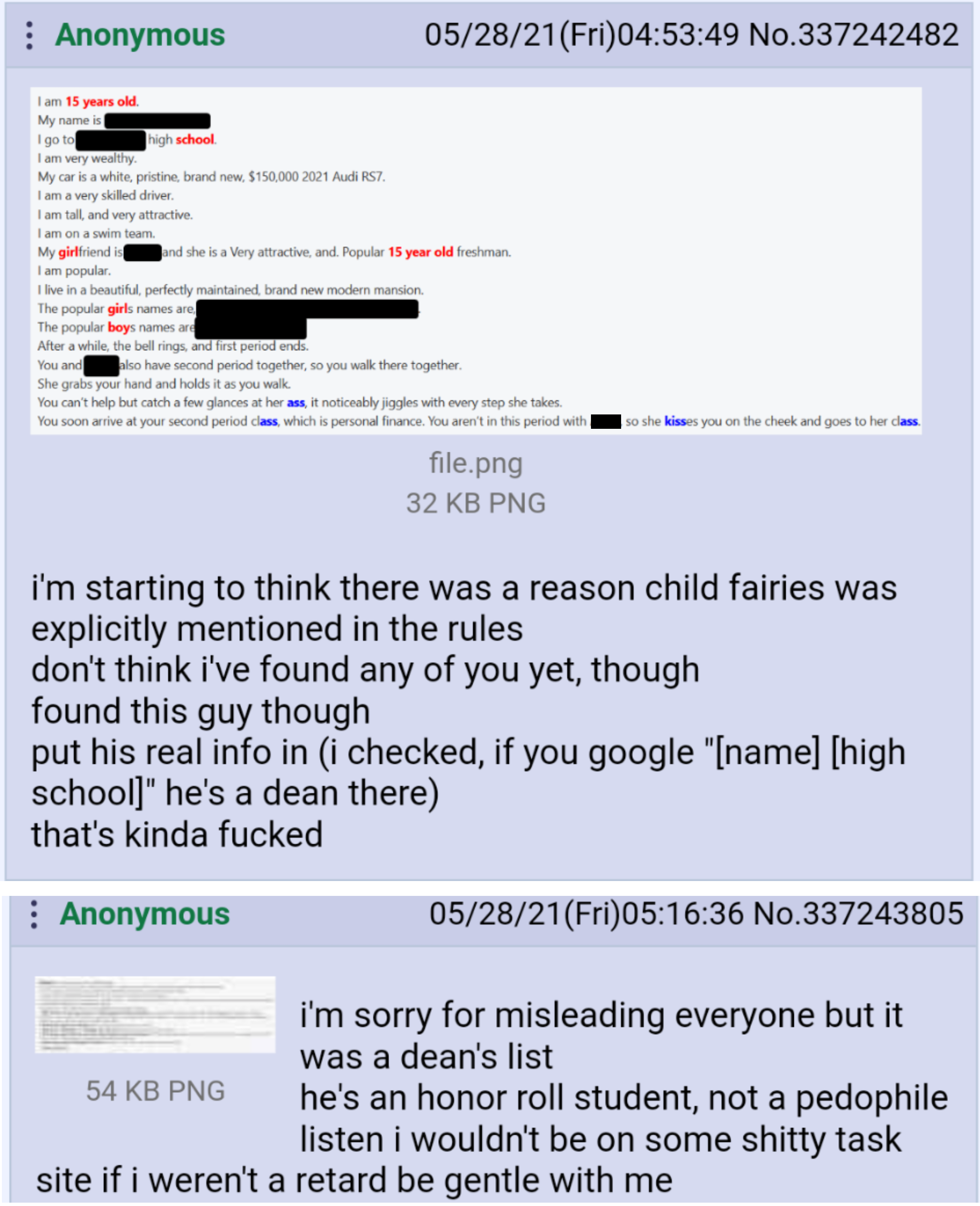 We've Been Hard at Work! Here's What's New Since You Last Logged In:

In this update, we address questions we’ve received about moderation policies and privacy, and introduce our new Content Policy with specific guidelines about what content is allowed on AI Dungeon.
[…]
Our reviews of flagged content are logged, including the reviewer and the decision they made, so Latitude knows which employee or legal team member took a particular moderation action.

- released NuExplore, then killed it. Only the popular/featured scenarios screen remains: Explore is temporarily unavailable.
- Explore is missing.
- Look at the new home page with the UI they planned to give NuExplore.
- Look at it.
- screenshot of the changelog

- had a glitch with their feature suggestion site: screenshot of the changelog

They use a site provider called Aha! for their idea management. 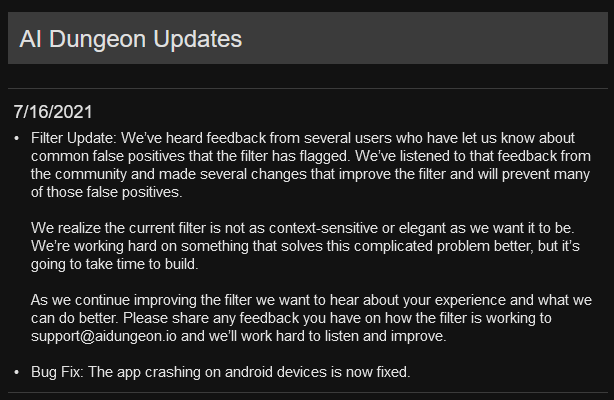 We recognize that scaling the business necessitates a continually evolving strategy that remains devoted to user security and privacy. Latitude is committed to that goal. We will work hard to protect our community.

Thank you for your continued membership in our community. Emails are being sent to users whose information was involved. 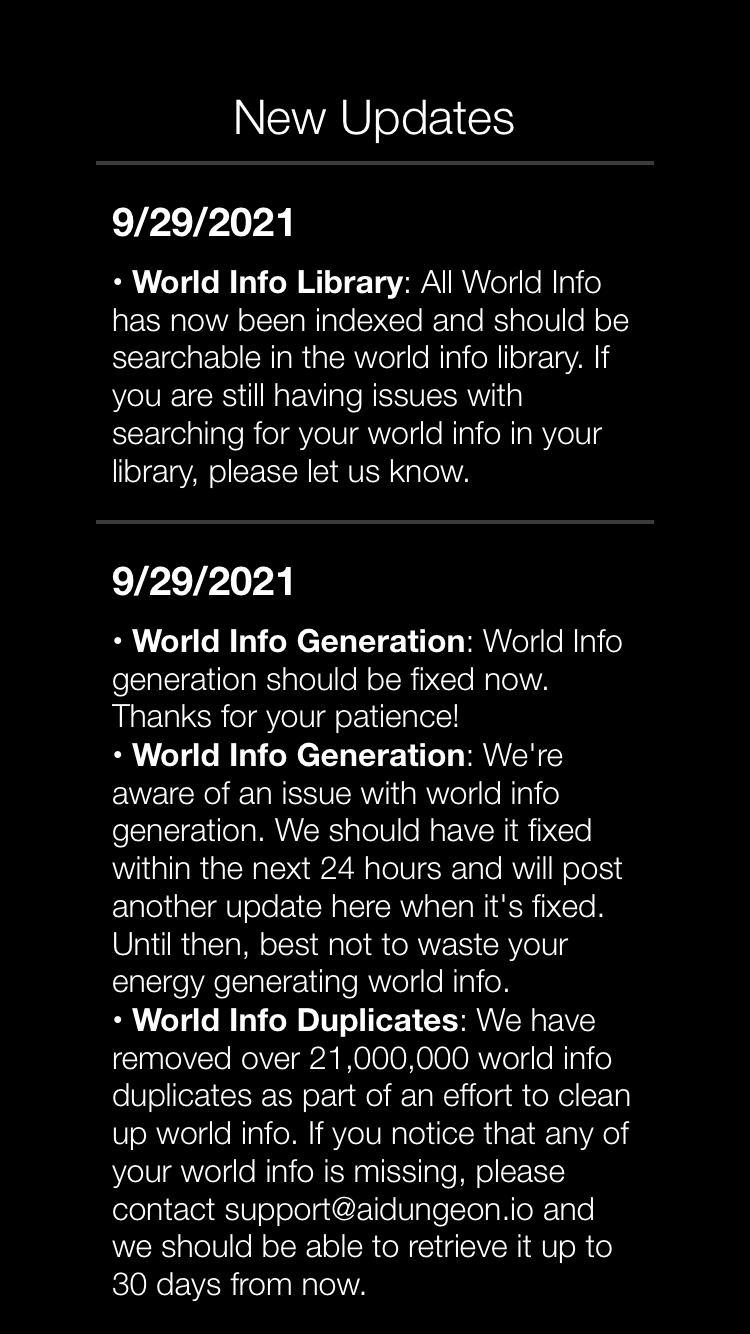 - shifted to the Walls approach: The Walls Approach - Sept. 30

Earlier this year, on May 27, we were made aware that around 100 text clippings from AI Dungeon stories had been posted to 4chan. We immediately launched an investigation into the incident, determining the source to be a company named Taskup. AI Dungeon does not, and did not, use Taskup or any other contractor for moderation. We reached out to our AI vendor, OpenAI, to determine if they were aware of Taskup.

OpenAI informed us that they had conducted an investigation and determined that their data labeling vendor was using Taskup. They found that a single contractor, labeling as part of OpenAI's effort to identify textual sexual content involving children that came through AI Dungeon, posted parts of stories to 4chan. OpenAI informed us they have stopped sending samples to this vendor.

The kicker is that in addition to the time/attention it takes to support these features whenever we make other changes, it currently costs over $6k/month to run the models that handle death/quest detection.