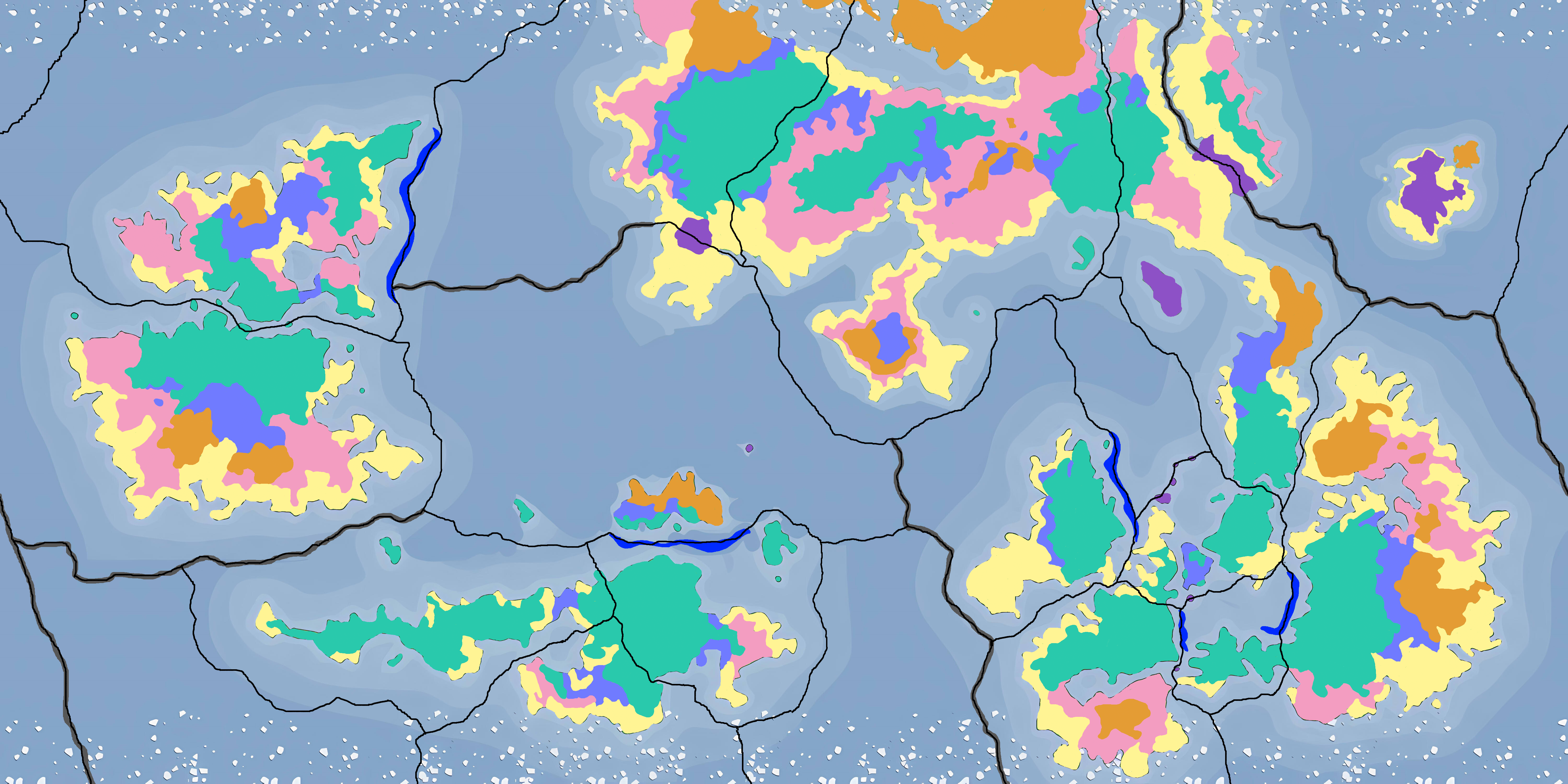 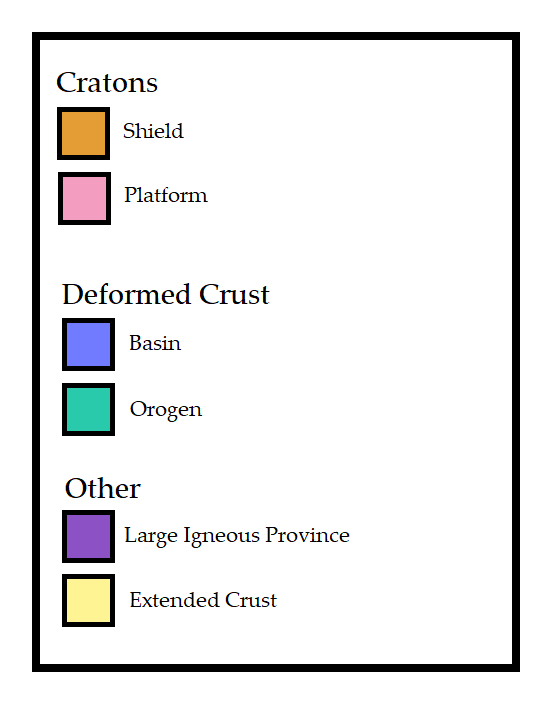 I'm not a geologist. I'm just a worldbuilding autist who likes doing this sort of stuff.
Everything here I studied over the last two and a half weeks. I will have made mistakes, but hopefully not any major ones.
If anyone who knows better finds these posts and notices a mistake, please do correct me. I'd be happy to learn to make these maps as accurate as possible.

Here is a map of Earth's geologic provinces. Map made by the United States Geological Survey. Use it as a reference piece. Do note that unlike the linked map, mine does not show the geologic provinces extending past the shores of landmasses, which they would in reality do.

Cratons are primarily composed of two types of geologic provinces, Shields and Platforms.

Large areas of ancient igneous (formed by cooled down and solidified lava) or metamorphic (formed from other types of rocks in high temperatures and pressures) rock. Shields are tectonically extremely stable, meaning that there events such as earthquakes or volcanism are virtually non-existent in these areas. Shields are generally flat or domed.

I chose to include shields on most continents, in locations where I believe they would most likely exists (meaning, the interiors of continents, and areas which have experienced little to no tectonic warping). However, due to not knowing the entire tectonic history of the world, these locations are only plausible ones, not definite ones.

Areas of relatively flat sedimentary (sand, silt, and the related rocks such as sandstone) strata (geologist's word for a layer of rock or sediment) laying over a basement of igneous or metamorphic rock. Platforms and shields together constitute cratons.

I used platforms as the default geologic province for when I could not come up with any other province to fill the area with. Thus, the exact sizes and shapes of platforms are the most questionable ones, despite this I believe my general use of them as sort of "transitionary zones" between shields, orogens, and areas of extended crust is a accurate enough to be plausible, if not likely.

This is not a correct scientific term, I just came up with it so that I could neatly group these two geologic provinces together. I think this was a reasonable thing to do since these types of provinces often (but not always) form together, and the methods of their formation are similar.

Areas where previously flat-lying strata has experienced warping due to tectonic forces, forming a geologic depression. Basins exist in two primary types, as sedimentary basins (structural basins where the depression in the crust has been filled with sediments), and as foreland basins (structural basins that develop next to mountain belts due to the immense weight of the mountains warping the underlying tectonic plates. Foreland basins are often filled with eroded sediments from the mountains they are associated with.)

I was very conservative with basins, sometimes overly so. Especially in the case of the rrat mountain range, where the basins on both sides of the mountain could reasonably be extended.

Areas where an ongoing or past plate collision has caused the crust to fold, deform, crumble, and uplift to form mountains and island arcs.
Do note that while all mountains are orogens, not all orogens are mountains. On my map, areas that surround mountains which I believe are still affected by the warping of the tectonic plates but aren't basins are marked as orogens.

In my opinion I drew in a bit more orogens than I should have, but their locations are for the most part very plausible, with the exception being most of /horni/ territories in the Fetish Continent and the Southern coast of the Northern Indie continent. I still think its plausible for these places to have orogens, but I also think that these areas could plausibly be either basins, extended crust, or platforms.

Geologic provinces formed by volcanism, sedimentary buildup, or a mixture of both.

An extremely large accumulation of igneous rock, usually formed by mantle plumes or divergent tectonic plates. The formation of LIPs are often associated with past mass extinction events.

Due to the way they form, the locations of LIPs are not bound by any clear sets of rules. Thus I chose to only make areas that either are canonically volcanic, or have been in the past, with the exception of the area in /polka/, some of the islands north of /nasfaqg/, and a single island northeast of /ybc/. As such, these areas do not have to be LIPs if the threads whose lands they are located on protest. However, I believe each of the LIP placement, with the exception of the small unclaimed island northeast of /ybc/ to be a justifiable one. The small unclaimed island northeast of /ybc/ is an LIP only because I could not reasonably assign it to any other geologic province.

The LIP in /polka/ could reasonably be a large rift valley, an area where a new sea is slowly (as in, over millions of years) forming as two continental plates drift apart. On earth, a similar thing is happening at the east african rift.

The small islands north of /nasfaqg/ look like a textbook example of a volcanic island chain forming due to a hotspot (Hawaii), or perhaps a series of islands that formed due to the plate boundary there being a slightly divergent one (Iceland). It may not be accurate of me to mark the islands as LIPs, but I think that them being that is within the realm of plausibility.

The question on the accuracy also applies to Sakuran, since a shield volcano wouldn't usually be marked as a LIP according to my understanding. However, the volcano is so incredibly massive that I think it being an LIP is reasonable. I think Sakuran could plausibly be classified as a supervolcano, but if it is, a divergent tectonic plate boundary cannot go through the land of Sakuran. I assumed Sakuran to not be a supervolcano in the maps I've made for this analysis.

Morig on the other hand I think would be a supervolcano. The island is located in the middle of a tectonic plate, hinting at there being a hotspot / mantle plume below the island. Furthermore, I think that this particular hotspot has erupted before, which played part in the formation of the most obvious LIP on the entire planet, the island of Infinity. Explained below.

The island of infinity has been volcanically active in the past, as stated in one of /infinity/'s lore documents, but the island isn't volcanically active any more. This means that the island's volcanism cannot reasonable be caused by tectonic plate boundaries, and the only other option to my understanding is a hotspot / mantle plume eruption, or a series of eruptions over the course of a few million years. These eruptions would have been massive (the purple showing you the extent to which the magma would have flowed), and likely resulted in a mass extinction event in the planet's past. This also sort of fits the lore written for the island.

Note: The Infinity island likely existed as its own continent before the eruption(s). The eruptions would have covered most the continent that once existed there, minus the small island to the northeast of infinity.

However, as the infinity island is no longer volcanically active, the hotspot / mantle plume has to have moved away or went dormant. I propose that it is the former, and the hostpot now exists below Morig, relatively dormant but active enough to have formed the island.

Areas where the crust has been thinned by extensional strain (rift zones, the area around /polka/ and Sakuran) or passive margins (a transition zone between oceanic and continental lithospheres. Coastal areas, areas that have experienced a lot of erosion and /or sedimentation due to rivers). Passive margins can be either volcanic or non-volcanic in origin. The only reasonable volcanic passive margins on the planet are those around the island of infinity, those in the seas surrounding morig, and those around the polka rift valley and sakuran.
Passive margins are mostly comprised of sediments.

Extended crust is another zone which I used quite liberally as a "filler" zone where I could not reasonably assign any other zones. Thus the extent of the Extended crust zones can be brought to questioning. Their locations however are accurate according to my understanding.

This concludes the Geologic Provinces analysis. Below are a number of links to different maps in case they are found useful.